KAOS is the leader in Australian radio promotion.

KAOS is proud to have represented 2 of the TOP TEN in the END OF DECADE Australian singles. Those being:

# 1 GOTYE Somebody I used To Know
# 9 SHEPPARD Geronimo 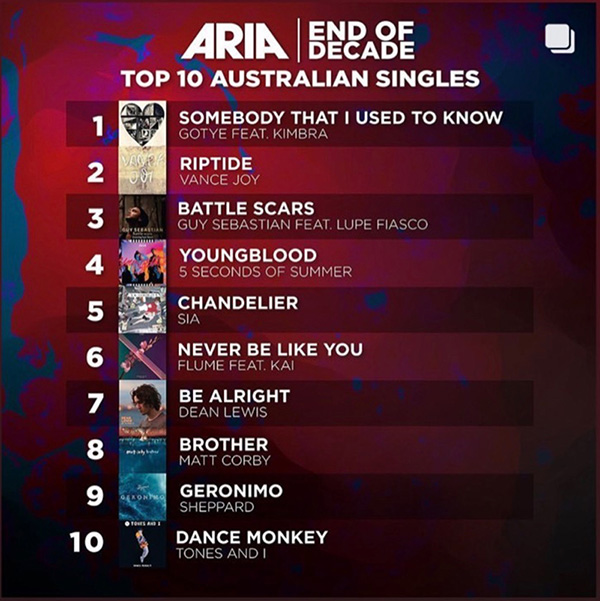 Russell relies on a personal approach and has weekly / fortnightly meetings in Sydney and makes monthly trips to Melbourne and Brisbane for
one on one presentations. This “in the flesh” approach is his trademark, as music programmers are inundated with emails.
PLAYMPE December 2015 enewsletter profile on Russell and KAOS sent to 26,000 record company people and radio stations. Read more here

KAOS track record speaks for itself. A few examples:
JOHN BUTLER TRIO – a client since 2001, 1.5 million albums sold and many ARIAS. #1 Most played song with “One Way Road” and many #1
albums – John is the “godfather” of independent music as his success at radio had paved the way for independent artists growth here.
GOTYE – #1 single and #1 Most played song plus 3 Grammy’s with “Somebody I Used To Know. Triple Platinum album with Making Mirrors.
SHEPPARD #1 single with Geronimo # weeks at #1 the record for most weeks by an Australian independent artist. 6 x times platinum and 7 weeks
#1 Most Played song in the country. Geronimo went on to get 38 awards in 24 countries, including platinum in the USA – over 1,000,000 sold.